Samsung Galaxy Note 10 will be launched soon This phone will be presented at the Galaxy Unpacked event in New York on August 7th. Now this phone has been listed on Geekbench. According to the listing, the model number of this phone is SM-970F. Here the phone is listed with the Exynos 9825 processor. Also, there has been talking of having 8 GB RAM. It has scored single-core score 4495 and 10,223 scores in multi-core. Apart from this, the phone works on Android 9 pie.

A snapdragon 855 variant of Galaxy Note 10 will also be made available, whose model number is SM-970V. It was listed on Geekbench last month. If we talk about scores, then the Exynos version is better than single-core test snapdragon. At the same time, the multi-core scores are almost identical. Even before this, there were many reports about the phone. 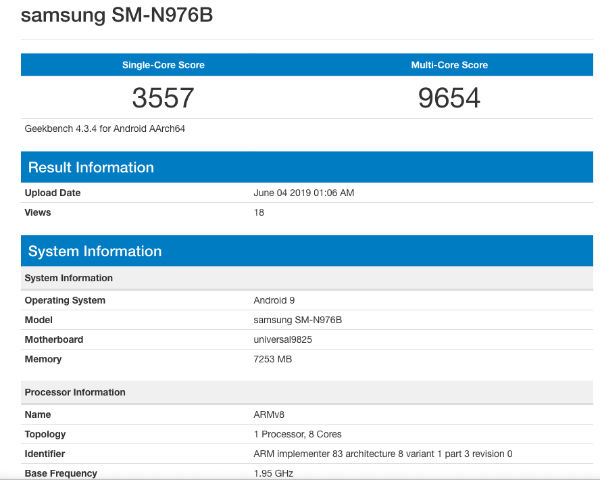 According to South Korean Publication of Bell, Samsung is working on two different screen size Galaxy Note 10. According to the report, a 6.7-inch display can be given in the main Galaxy Note 10, which will be similar to the Galaxy S10 5G. Also, the A + grade panel can be given in the Galaxy S10 +. According to the reports, the phone can be launched two variants. It will be the first pro variant that will be equipped with a sensitive edge and a non-physical button. At the same time, the second can be launched with a non-deductible Bixby Button. It is expected to be between 1100 to 1200 dollars (76,000 to 83,000 rupees). At the same time, the small version of Galaxy Note 10 will come with 6.4 inches, which is similar to the Galaxy S10 +. Apart from the screens, Galaxy Note 10 is expected to provide quad camera setup.