Samsung has launched its three new smartphones Galaxy A50, A30 and A10 under the A Series. Talking about Galaxy A50, it has been introduced in two variants. Its 4 GB RAM and 64 GB storage model cost 19,990 rupees. At the same time, its 6 GB RAM and 64 GB storage variant costs Rs 22,990. This phone will be made available on Samsung Online Store and Leading E-commerce sites from March 2. We used the Samsung Galaxy A50 for a while. If you are planning to take this phone from Samsung’s new series or want to know how it is, then read this phone.

Holds the phone and comes Rich. The phone is slick. On the right side of the phone, volume and power on/off buttons are given. Headphone jack side charging port at the bottom of the phone is given. Triple camera at the rear and camera in the front, Waterdrop Notch in the front. Dolby Atmos is present for better sound in the phone. However, it will work with headphones only. 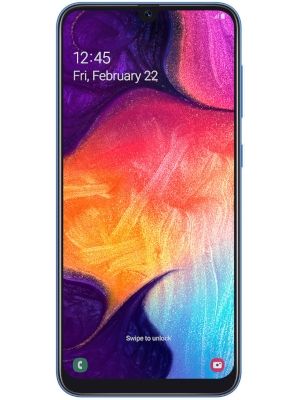 The phone has a 6.4 inch full HD AMOLED display. Samsung has used Infinity U display in this phone. Due to the full view display, the viewing experience of video streaming services like YouTube or Amazon Prime is good. Color contrast is also better. The quality of the phone’s display can be said to be better than the average. There was no problem in the brightness level. The screen also has light in the sun. An on-screen fingerprint scanner is also provided in the phone. It will take you 2 minutes to set up a fingerprint. Talking about unlocking speed, this is average. We are not happy with this.

The phone has been given Exynos 9610. We have 4GB of RAM and 64GB memory variant of the phone. The phone has an octa-core processor. The phone has been the latest Android Pie operating system. The company claims that the phone is just above gaming like PUBG. However, we have not seen this in gaming for a long time. However, we had to face a lot of lag while multitasking on the phone. The phone switched slightly even after switching fast from one app to another. But still, the use of some time cannot be said about its full performance. A 25MP + 5MP + 8MP triple camera is provided in the rear of the phone. Its front has a 25MP camera. The company has made this phone not only ultra-wide photos but also photos of ultra-wide videos. Slo-motion feature b is present in the phone. The Live Focus feature is also featured in its front camera.

The phone has a 4000 mAh battery. With this, Fast Charging feature has also been made available. Its charging port is USB Type C. In average usage, the phone is also running from 1 day to a little more. However, with more chatting, video-audio streaming and gaming, the phone has to be charged at the end of the day.